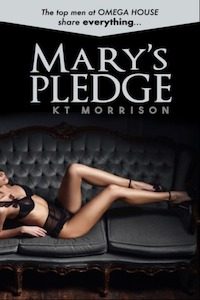 There’s only one thing Jack Kingsway has ever told Mary he wanted: to be an Omega Man. To be a member of the most prestigious and ancient fraternity, one with its tendrils in every place of power in the world.

He’s legacy. Except there’s one knot in the rope: his father rejected Omega. And it ruined the man’s life. Jack swore he would restore to Omega House the Kingsway tradition.

But when Jack finds out there’s a price he’s not willing to pay, he knows he’ll have to suffer the same fate as his father. Mary knows Jack can be a stuffed shirt, but he’s a man the way she dreams a man will be.

The top men of Omega House are rich, and powerful, and handsome. She’ll pay the price for Jack. She’ll do whatever they want…

The Gay Haunting of a Gay Frat ~ Bro Biggly 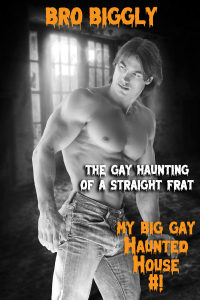 I’m a big guy, especially where it counts. Lately, though, seems like a lot of people in this college town are looking right through me. And now my place is getting a reputation as a so-called haunted house.

Some of the frat guys say I’m a ghost. Not sure I’m ready to hang that label on myself, but…

Anyway, we’ve dreamed up a wild plan to haze this year’s crop of incoming freshmen. Let them spend a night in my big gay haunted house. When I say, “Boo,” it’s guaranteed to turn all those straight frat boys gay. 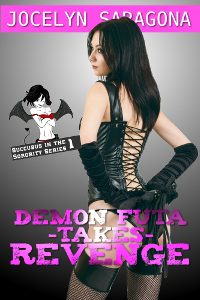 Sharis is a futanari succubus on her way to her sorority’s first big party. Her futa nature is no secret to Lucy, who won’t keep her hands -or lips- to herself during the car ride. That’s only the start of Lucy’s impulsive exhibitionism. She shags a guy before the entire party. It excites Sharis and she wishes she could be that bold.

But Lucy is whipped, disciplined, and humiliated when upper-class members disapprove. Worse, someone recorded her little show and is blackmailing the entire sorority. When seduction isn’t enough to catch a blackmailer, the sorority turns to Sharis and her supernatural abilities. She makes a dubious deal with another, more powerful, hell-born vixen to save the sorority’s reputation.