For Him ~ Lauren Milson 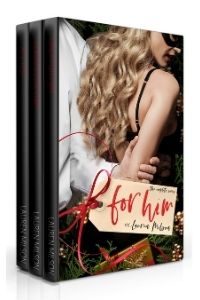 I may look nice, but I have a naughty gift to give this holiday season…and there’s only one man I want to give it to…

Come along for a wild sleigh ride through three over-the-top insta-love holiday romances as our couples make their sweet and steamy journeys to a very happy HEA. 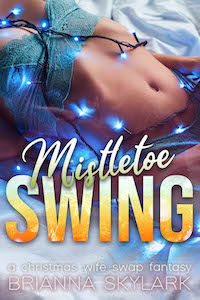 All she wants for Christmas is to snuggle down in front of an open fire with her man, and have her stocking stuffed by her best friend… and her best friend’s husband.

After all, Christmas only comes but once a year… or maybe twice, or three times… 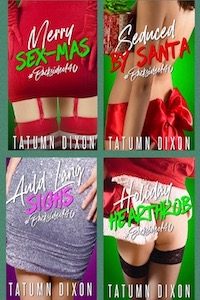 Merry Sex-mas, Seduced by Santa, Holiday Heartthrob, & Auld Lang Sighs together for the holidays! A sexy holiday trip to the mountains. A teasing Secret Santa. A one-night stand with a billionaire–resulting in a naughty trip to the world’s largest Christmas store. And a blazing hot countdown to the New Year!
ALWAYS CHECK THE PRICE BEFORE YOU PURCHASE

For Him ~ Lauren Milson

I may look nice, but I have a naughty gift to give this holiday season…and there’s only one man I want to give it to… 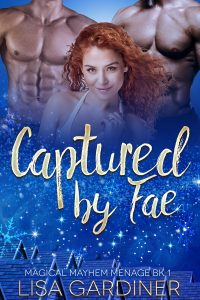 It’s a lovely night for a sleigh ride— until something wicked takes the reins.

When Nick and Kris, the half-fae sons of human mothers, aren’t using Santa’s sleigh in the off-season to make deliveries for their booming sex toy business, they’re setting off sensual fireworks in the bedroom.

Yet they dream of a feminine third to complete their lives. There’s only one woman they can picture filling that role: Lilly, the girl they both dated in college.

Lilly thought earning extra money stripping was a good plan, until she’s left battered, bruised, and stuffed in a back-alley trash can.

Her rescuers turn out to be the dark, brooding Dom and the golden-haired sub whose faces—and shockingly entwined bodies—are still the stuff of her most searing fantasies.