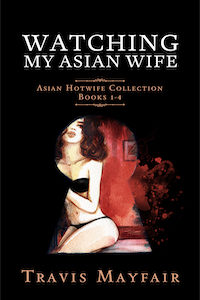 Sultry Asian wives love to cheat. Their husbands love to watch… and even clean up.

This is a collection of four books from Travis Mayfair’s series Asian Hotwife:

Book 2: Sharing Mayuki
A surfing instructor steals Mayuki right out of Ichiro’s hands. On their honeymoon! And Mayuki is giggling and kissing that man, like nothing’s wrong.

Book 3: Sharing Yoona
Danny isn’t sure what his hot Korean American wife sees in him. He can’t even afford to buy her champagne. But her favorite rapper, BBD, can.

Book 4: Sharing Mimi
Busty Singaporean Mimi is a flight attendant in first class. Internet billionaire Morris Blackmore takes an interest in Mimi’s womanly figure and tells her husband not to be so useless. 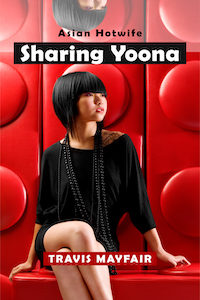 I’m not cool like the jocks who stare at my gorgeous Korean wife. I can’t even afford to take her clubbing. I know she goes out without me. But at least for her birthday, I take her to see BBD in concert.

He’s huge. He preens around the stage like a cobra ready to strike. And when my wife wants a bottle of champagne, I can’t afford it, but he can.

Then he invites my wife up on stage. And he wants me to watch.

Why am I going along with this? 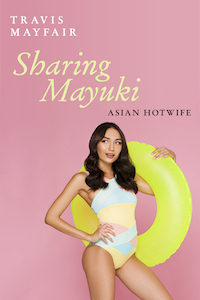 Really, on our Hawaiian honeymoon?

Men looked at Mayuki back in Japan. But not like this. This muscular blond surfer guy is shameless. Like he’s going to take her away from me.

She’s scared of him at first. But when he just walks up to her at the hotel restaurant, her reaction isn’t what I expected. She’s smiling at him. She laughs when he lifts her into his huge arms. There’s something about the way she looks in his eyes. It’s more than I agreed to. I hate to see the spark between them, but I secretly love it.

He’s holding my wife’s hand and laughing up at me watching from the hotel room. Now they’re going surfing together? 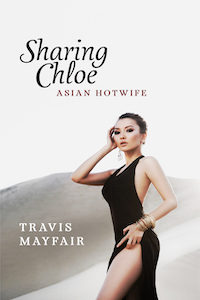 Almond eyes, jet-black hair, long legs, and a body that’s a walking invitation to the bedroom . . .

Travis first noticed Chloe when he was her professor in Hong Kong. Now they’re married, home in California, in a sea of envious stares. Every guy has eyes for Travis’s hot twenty-four-year-old Asian wife. Travis doesn’t mind. He enjoys it, he thinks.

Chloe was shy when she arrived in America, but Travis introduced her to the nightlife. Men stared. She flirted. Travis allowed it.

It never went farther than that. There were boundaries.

But tonight, six-foot-six star linebacker Clayton Sizemore notices Chloe. One look at her body, and Clayton knows what Travis’s wife is hungry for.

Clayton’s muscles, his size, and his huge hairy chest peeking out fom under his dress shirt catch Chloe’s lustful fascination.

What happened to those boundaries? 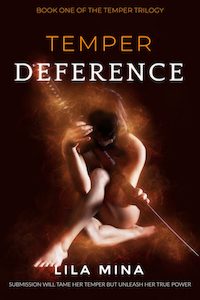 Lana should turn down her harsh and dashing martial instructor, but their angry fires are a perfect match, and the man unlocks all her darkest desires. Then his sensual wife waltzes in with an alluring smile, and Lana’s life turns upside down.

Maybe this time everything will work out… Maybe her love won’t drown in blood and tears…
Or maybe not. Because it’s not just fierce passion that their affair has unleashed. Something stirs in the dark, and it wants its prize back.