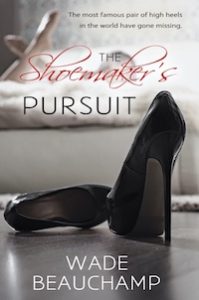 ORIGINAL PRICE $2.99
In 1952 a young Italian shoemaker named Paolo DeLuca fell in love with the daughter of a widow and hand-crafted for her a gift: a pair of high heels. The girl refused to wear the scandalous shoes. But her mother did not. Those heels would give birth to the most famous shoe of the 20th Century, what fashion critics would dub the Ray-Ban Wayfarer of footwear: the DeLuca Rampa. What the Little Black Dress was to Coco Chanel, the Rampa was to DeLuca, making him and his company household names. And then, the shoes were lost. Hollywood icons and waitresses, rock stars and prostitutes all walk a mile in these shoes over the next half a century as Paolo tries to track them down. The Shoemaker’s Pursuit is a collection of eleven interconnected tales about the most famous pair of shoes ever made. Take a walk on the wild side.
ALWAYS CHECK THE PRICE BEFORE YOU PURCHASE