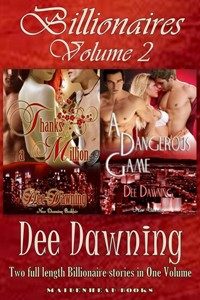 Thanks A Million
Billionaire, Stuart Wynne considers Fallon, the girl who got away. While Stuart is preoccupied with another woman, Fallon is swept off her feet by a lowly pit boss. After a whirlwind courtship with the devilishly handsome, Dana Allen, Fallon marries him before Stuart even realizes anything’s amiss.

Done deal, right? Maybe, but never count Stuart out. As a master card player, he has yet to play all his cards.

A Dangerous Game
Kicked out of her home at seventeen when her father discovers she’s pregnant, Loretta after a 3 month stint in an Elko whorehouse, heads for the city of Glitz & Glamour—Las Vegas—where she finds work as a cocktail waitress.
Years later Loretta meets Bobby, seventeen years younger and falls in love.